Ephesus or Papua New Guinea ~ The Culture Clash of Acts 19

It’s a Saturday in Port Moresby and it’s a market day. I shop alongside other expatriate customers, slowly perusing the goods, looking for mementos of my time in the South Pacific. The vendors patiently endure the heat and humidity, gently fanning flies and swatting mosquitos. They smile eagerly, revealing teeth stained red from chewing betel nut. Tables are covered with hand carved bowls inlaid with mother-of-pearl, jewelry, and figures of crocodiles, turtles and pigs. On the ground are more sinister displays of bows, spears, axes and machetes. Encircling this eclectic mix of objects are vibrant paintings depicting local life, bilums unique to every village and beautiful hand-woven textiles. Amongst it all, it’s the tribal masks that draw my gaze. They are frightening but I stare anyway, enthralled by their ethereal appearance. I find myself wondering about their origin and use.

Bilums are unique to the village where they are made 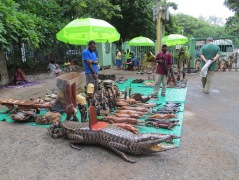 Crocs and such ~ Shirley Ralston 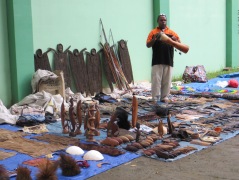 The markets are an important part of the economy, especially for the individual vendors. Artisans from the city and surrounding villages bring their wares to sell in one of several open-air venues around town. They are colorful events that provide an interesting glimpse into local life.

The arts and crafts are distinctly Papua New Guinean. Some are inspired by tribal culture and ancient religious practices. A long time missionary to Papua New Guinea explained to me that vendors often chant over the things they bring to market, hoping this will bring a good sale.  Some items may have been used to ward off evil spirits, for sorcery or for retaliation against enemies, even to catch more fish or bless a harvest. I heard a very wise local pastor give a warning to beware of purchases in the markets. “What may seem like an innocent souvenir to you, could have been used in cultic practice”, he said. Romans 1:23 comes to mind.

While the country is one of the most missionized places in the world, it is clear that implements of the past still hold sway in PNG culture. This syncretism creates tension between the teachings of Christ and age-old complex spiritual beliefs. Recently, a controversy erupted over the removal of tribal carvings in the Parliament building by a member of the government. Some see them as demonic, identifying Papua New Guinea with a past they no longer want to claim. Others feel they are part of the nation’s cultural heritage that must be preserved. A fractious debate has ensued over the integration of the country’s history and their Christian faith.

The similarity between what is happening in PNG and what occurred in Ephesus in Acts 19 is striking. Paul’s missionary journeys often ignited a cultural clash when he introduced the gospel message. Ephesus was no exception. His mere presence creates a disturbance and his testimony about Christ ripples through Ephesian culture, affecting their religion, politics, and the economy.

In Acts 19:15, evil spirits recognize Paul and the authority of Jesus, exposing the counterfeit exorcists trying to co-op Christ’s power. “The evil spirit answered them, “I know Jesus, and I recognize Paul—but who are you?”” I love the irony. Evil that is diametrically opposed to Christ actually reveals His authenticity. As a result, those who believed in Him set fire to their valuable sorcery scrolls (Acts 9:18-20), forsaking their lucrative economic livelihood. The conviction with which they abandon this pagan practice causes the word of the Lord to spread and grow. 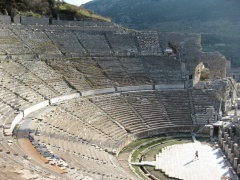 The Theatre at Ephesus
http://en.wikipedia.org/wiki/Ephesus

Paul moves on to Jerusalem but the ripples of his revolution remain in Ephesus.

Demetrius, a silversmith and spokesman for the artisans of the temple, lodges a protest. His grounds? That Paul’s message has misled the people and interfered with their way of life. It’s interesting to look at the way he couches his argument:

Reconstruction of the Temple of Artemis at Ephesus
http://en.wikipedia.org/wiki/Temple_of_Artemis

For many in Papua New Guinea, it is the challenge to abandon the counterfeit power of their pagan past, and take hold of the authentic power found in Christ. Should they preserve their cultural history? Absolutely, it is part of the powerful testimony of their road to freedom. This is true for every believer.

Dear friends, the world is full of “tribal masks” that draw our gaze from Christ. Are you hanging on to the counterfeit power of money, status, intellect, or a relationship? Maybe you struggle with misplaced spirituality. Can you put aside all superstition, notions of luck, or other belief systems that have control over your life? Are you careful about spurious doctrine that alludes to something more than Christ alone? In his book, The Weight of Glory, C.S. Lewis says, “He who has God and everything else has no more than he who has God only.” It is good to remember that anything we put our faith in more than Christ can become an idol. 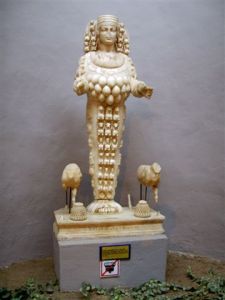 I'm a returned Christian expat living in Texas after several years residing in the Middle East and the South Pacific. I have the great privilege of writing about my experiences through the eyes of my faith, and to know and love my brothers and sisters serving in Christ's name all over the world. I have a special heart for the missionary community whom I now serve through the Missionary Care Team at my church. I am a writer, researcher, teacher, and archaeology enthusiast who also loves peering into the heavens any chance I get - but most importantly I am a wife, mother and grandmother who loves the Lord. "The fact that I am a woman does not make me a different kind of Christian, but the fact that I am a Christian makes me a different kind of woman." Elisabeth Elliott Shirley Ralston (MA Christian Education, Dallas Theological Seminary)
View all posts by texpatfaith →
This entry was posted in Devotional Essays and tagged Acts of the Apostles, Apostle Paul, Artemis, Christian missionaries, Christianity, culture, Demetrius, Expatriate, Idolatry, Papua New Guinea, Port Moresby. Bookmark the permalink.