The Struggle with Expectations

This past weekend, the eyes of the world were on the All England Club in London. The Wimbledon tennis finals were especially popular in Dubai. The reason? The large contingent of expatriates from the United Kingdom combined with the opportunity to watch one of their own in the men’s final.  The UK’s Andy Murray finally made it to the men’s championship match. I heard one commentator say, “If he wins he’s a Brit, if he loses, he’s a Scot.” You read between the lines…is that comment not fraught with pressure?

The camera loves these two. Andy Murray performed admirably under their hopeful gaze…despite his loss.

Andy Murray came onto the international tennis scene amid much anticipation and promise. After a successful beginning, his performance failed to meet expectations over time, mostly because of his inability to win a grand slam title. His resurgence in performance and popularity this year led to a chance at renewed glory. The eyes of his fans, friends, family and country (not to mention Pippa and Kate)were upon him. We watched as he battled tennis legend Roger Federer for the Gentlemen’s Singles Trophy and the title, ‘The All England Lawn Tennis Club Single Handed Championship of the World’. Yes, that’s actually what’s written on the championship cup! 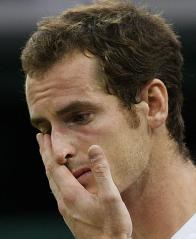 The visible emotions of unmet expectations.

How in the world does one perform under that kind of scrutiny? Some shine, others shrink, most probably struggle between the two. This week our study of Judges introduces us to a man who knew all too well what it meant to shine, shrink, then shine again.

Othniel (AHTH nih el) was the first judge to fill the gap of leadership left by Joshua as the Israelites attempted to possess their Promised Land. We are given a hint at what lies in store for Othniel in Judges 1:13 when, under Caleb’s direction, he experiences early military success on Israel’s behalf. It seems natural that he would accept the mantel of leadership over his people. But suddenly, the record of this promising and clearly capable leader goes silent. Israel falls in with the pagan Canaanite crowd and is subjugated to a Canaanite king. It is not until God’s people cry out for deliverance that we find Othniel front and center once again. And the expectations are great. Here is a man who seemed to have everything needed for victory – ability, proven performance, and a strong family heritage. In fact, as Caleb’s kinsmen by blood and by marriage, he is the last link to Israel’s former leadership legacy. This is not however, the ultimate reason for his greatness this time around.

Just like Othniel, each of us has been sovereignly placed for service and influence. Yet we often shrink under the weight of insecurity and human expectation. Do you desire a courageous faith that will enable you to use the gifts God has given you? This Friday we will learn the real meaning of Othniel’s name and what it was that enabled him to put aside crushing expectations and shine.

Never underestimate the good that one person can do who is filled with the Spirit of God and obedient to the will of God.[1]

I'm a returned Christian expat living in Texas after several years residing in the Middle East and the South Pacific. I have the great privilege of writing about my experiences through the eyes of my faith, and to know and love my brothers and sisters serving in Christ's name all over the world. I have a special heart for the missionary community whom I now serve through the Missionary Care Team at my church. I am a writer, researcher, teacher, and archaeology enthusiast who also loves peering into the heavens any chance I get - but most importantly I am a wife, mother and grandmother who loves the Lord. "The fact that I am a woman does not make me a different kind of Christian, but the fact that I am a Christian makes me a different kind of woman." Elisabeth Elliott Shirley Ralston (MA Christian Education, Dallas Theological Seminary)
View all posts by texpatfaith →
This entry was posted in Devotional Essays and tagged Andy Murray, Dubai, Expatriates, expectations, Israel, Judges, London, Othniel, Wimbledon. Bookmark the permalink.

1 Response to The Struggle with Expectations